Is Now A Good Time To Jump In?

Hey Rob, “Do you think this is a good time to jump into the market?”  That’s a question that I’m often asked by those around me.  Here is my answer…no idea.  Not because I don’t know what I’m doing, not because I haven’t done my research, it’s simply because markets are completely unpredictable at times.  I’ll give you two examples.  First, let’s look back to the financial crisis. March 10, 2009 seemed like another day in a long run of market declines.  The S&P 500 was down 57% from it’s high. It had gone down 4 weeks in a row and “experts” were predicting it could fall to 400. Then something happened, the S&P gained 6.4% that day and never looked back.  The index that started the year down over 20% rallied on March 10th and finished the year up 26.4%.   Second, moving to present day, since the bear market low on March 23rd, the S&P 500 is up 49.3% at the end of last week.  On March 23rd, the United States reported over 10,000 new daily cases of Covid, peaking at over 75,000 cases on July 17th.  The week of April 20th saw 3.84 million new jobless claims to bring the U.S. total over 30 million.  None of this news negatively affected the market and it kept running.

“Jumping” into the market is never a good strategy.  Sure, you might get lucky and maybe you jumped in on March 23rd.  That’s great for you, but I wouldn’t necessarily call it a sound investment strategy.  I want to discuss two key principles that I review with my clients when we get together:

First, Time IN the market tends to work better than timING the market.  The below graph shows the annualized return of a $10,000 investment into the S&P 500 from January 3, 2000 to December 31, 2019.  Think about how many up days there were in 20 years, how many down days.  Think about when we thought the financial world was ending in '08 and '09 and when we thought the bull market would never stop in the late teens.  Well as the graph shows below, simply missing out on the best 20 days in a 20 year period can essentially wipe out any potential return. 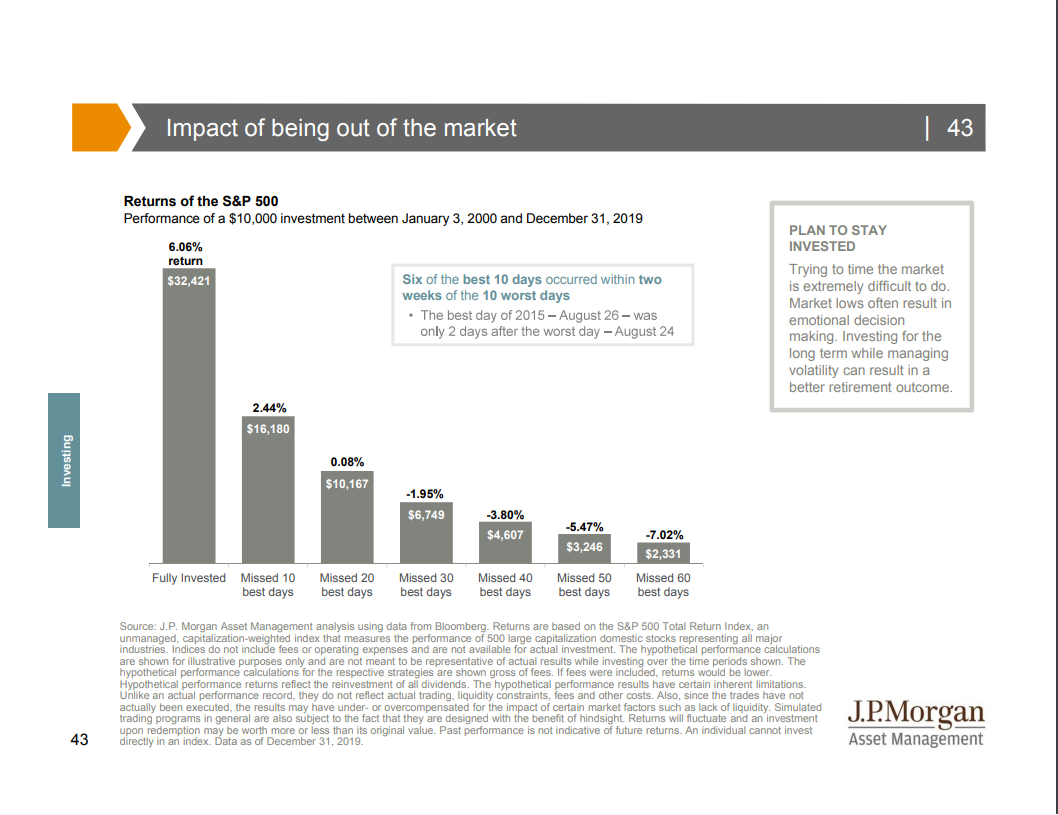 Second, any investment account you own should have an end goal associated with it.  That goal should be built around your time horizon (how long until you need the money?) and your risk tolerance (how much of a loss or potential loss is going to keep you up at night?)  If you have a particular investment account that is being funded in order to purchase a new home 3 months from now, why do you have a large amount of that account invested in equities?  The bottom line is you shouldn’t.  Conversely, if you are 25 and you are funding a 401K for the first time, why do you care if that account drops because you’re invested in equities?  I would argue you shouldn’t.  In fact, if you can, add a few more dollars to your 401K in the next pay cycle.  You are buying into the market cheap.

“Jumping” into the market is usually not the way to go.  As I said before, you might get lucky, but what happens when that luck runs out?  Have a plan and a strategy built around what that account is intended for and stay consistent.  Those principles tend to work for you in the long run.

Feel free to pass this along to anyone you think may benefit from reading .